We had a lovely young dog about 6moths old 30kg a cross breed brought in. He had his foot injured in an RTA. He was a stray and in with us until healed and rehomed or reclaimed
I was on the night he came in. He was very nervous but sweet. I popped him onto the table and set about cleaning his foot, l also placed an iv and fluids.

Before l started to clean l took photos but couldn’t get photos between the toes as they were too sore to open. Also placed a paper ruler around the feet to try and show the size of the swelling, it did not come out to well on the photos but worked enough.
He was good as gold for his first foot dressing just laying there, with one person holding him, while l cleaned, dried and dressed it. The foot was very swollen and there was a nasty wound on the outer aspect of the medial toe and the vet was not sure if the toe would need amputation. The top of the foot also had sores and in between the digits as well, these wounds were deep up into the toe creases.

Because he was a bit wriggly the honey went everywhere, well it seemed to but eventually the foot was dressed, honey was cleaned off all of us and he was placed in a kennel with duvet food and water after some jabs of pain killer, anti-inflammatory and antibiotics.
I was on duty for his first few days and we hit it off from the start. In fact l was the only one he seemed to be happy with and l always got great sloppy kisses. He kennel guarded but allowed me to go in and get him out.

He was to have dressing changes daily for the first 3 days then in theory every 3 days but the problem was when l was off he got the taste for the honey. The little “sod” had learnt how to somehow crush his buster collar, push his foot close enough and suck the toe end out then eat the inner dressing.
This means that he has at times had up to 3 dressing changes in a day. At times things went well and it was 24hrs between dressings. The problem was we use maluka honey dressings which is brilliant for wounds somehow he got the end of the dressing off one day so of course once he tasted it he knew exactly where to find the yummy taste. Buster collars only helped so much and he was on the biggest usable size/neck/head, any bigger they almsot fell down his body the collar neck was so big.

Dressing changes were always amazing as he just lay there while he was changed. The helper never had to do anything other than try and keep his tail from whisking up to hard and waggling his bum and then his leg. Once his dressing was off was a bit more work as he wanted to lick his foot for more honey.

One morning I found yet another bare toed foot peeking out at me at 05:00 and as l was alone no vet (gone to bed) no auxiliary (gone home) 2nd nurse (gone home) l did some cussing, got the dressing materials and set to dressing the foot on my own. If it did not work then l would buzz the vet to get his carcass out of his bed and come and help but l decided to see how things went first.

Up till now he had always had 2 people doing the dressing changes, a holder and a wound dresser. I grabbed a front and back leg and pull pushed his 30kg down he flopped happily on his side on his duvet. We made sure he had a duvet as despite being a monumental pain in the arse eating his dressings he was everyone’s favourite. He didn’t kennel guard any more and just wanted loads of loving.
Once he was flat l pinned his neck till he got the message and lay still, l also muttered endearments to him on what l would do if he moved, which he ignored after the first couple of comments.
I cut the old dressing off with a scalpel and had to get very firm as he tried to grab my hand, not ideal with a sharp scalpel blade in it. He lay back and sulked, trying the big “poor unloved me” look, this time it didn’t work due to the situation.

I threw the blade back out the kennel as far as l could then got the old dressing off. By mistake l dropped it by me. “Shark teeth” saw a possible source of honey and while the back end obeyed my command to lay flat the top side lifted and made a grab. A short tug of war and unhooking bandages trapped round teeth the dirty dressing joined the scalpel as far away as possible.
Another firm push and this time l placed my right leg firmly on his neck to hold him down. He figured play time and rolled to try and eat my foot, another tussle and he lay sulking planning his next move.

I unwrapped the new dressings and felt his body tense, glaring at him and muttered some more rude words so he lay back staring at the dressing pack. Watching out of the corner of my eye l saw his look change to "yup there came the tube of honey it just had to be all for me".
A rather stern comment from me and a threat of clubbing him to death with a soggy bread roll (my ultimate threat) brought obedience. Actually it was more the fact l grabbed his head mid lunge and held it back flat on the duvet that got through to him.

I cleaned and dried the foot and threw the cleaning swabs and drying cotton wool l had used well away from him. Then l got the dressing on, he was a bit ticklish with the foot but did lie still. As soon as l was done he leapt up and tried to grab all the dressing material he could while l fought to remove it. Bloody dog what part of “drop it you useless ************” did he not understand? Thank goodness the scalpel was far away. And yes he got lots of cuddles and some doggie treats for being almost so well behaved despite a few lapses.

After about 3 weeks of steady dressing changes the foot was hugely improved, he still had his toe and was awaiting his new home.
When we had a quiet spell at night one of us would go and get him out to have a play with us in the medical prep area, he would then go exploring. Listening to our “oy out of there” and looking back over his shoulder trying to decide if he should go into the animal ward or laundry room or wherever he was being ordered out of if is really worth going in. Curiosity won about 50% of the time, he would come belting out trying to look innocent when he heard us heading for him to haul him out.
Animal food kitchen was a special favourite as that is where the treats are and he knew that someone is going to get him something and if he plays the cute card right lot’s of something’s.

The dressing continued but he was getting wrigglier, first photos he hurt to much to move but as wounds healed he wriggled and with a camera phone it ended up blurred however the photos give an idea of the healing going on. The timings on the photos are approximate in weeks. 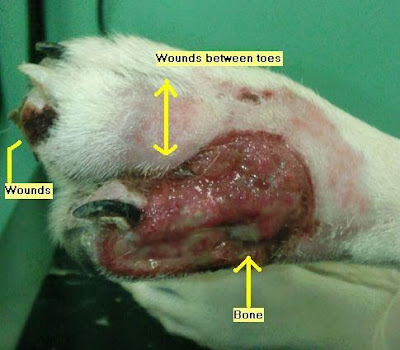 Size of damaged foot compared to normal one, on the normal one the paper wraps back under itself, on the damaged one the ends do not meet 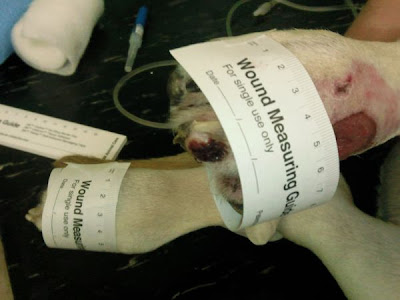 Week 2 wounds on pads healing and also top of foot 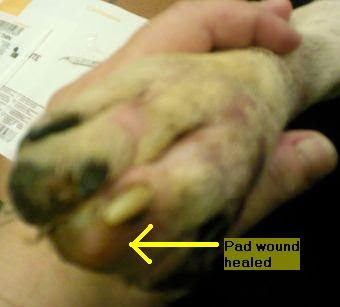 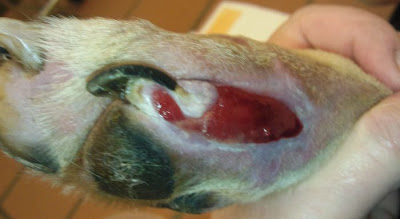 Week 3 wounds between toes clear and able to open toes 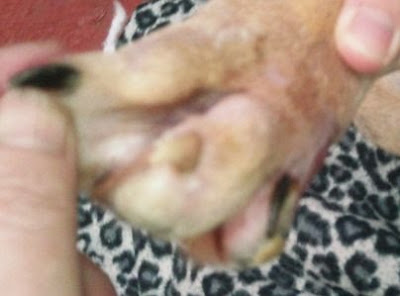 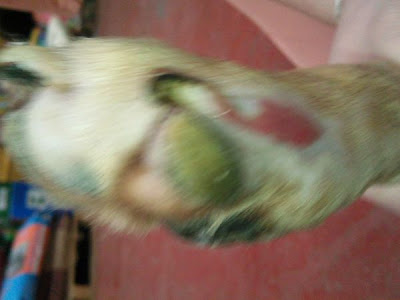 Vetnurse
I am a Rhodesian by birth was born & brought up in Bulawayo. We came to UK when l was 16. My other half l lived 5 years in Tenerife. While there l ran the kennels for K9 animal rescue. I was head keeper at Tenerife Sur Zoo for a time. l believe in Angels & have seen mine several times. I can't cook and hate the cold & wet on Mud Island. I call a spade a spade or a shovel or a thing to dig a hole. I am a locum veterinary nurse & have 11 years emergency night nursing under my belt, now l only work days. Brian passed in a skydiving accident in 2010 that killed him & his friend, I know he is with me he helps, guides me & gives me strength to go on when l falter, which is quite often. I met Andy and we married last year. He is just as amazing as Brian but totally different except they were/are both great cooks. I am now polyandrous . . . . . . . . . . . . . . . . . . . . Any animal should always be treated by a vet. The comments in this blog are my own observations, Animal details changed situations are real.