This post is not for the squeamish. It is upsetting l know because l am still upset and angry and l deal with death every day but this is for me a very personal death.


I was doing an anaesthetic a couple of nights ago when the locum vet came in and asked for advice on how to put a tortoise to sleep. She had one in that needed doing asap and was worried as they are so difficult to deal with.

The owners thought it very funny when they described how they threw it to their dog to play with and how it ripped into it and vomited up the part it had swallowed of the tortoise a few minutes after swallowing it.
The vet is reporting it but l think it may not get prosecuted due to the fact the owners took it to the vet and how do you prove other than they found it funny and admitted to doing it do you prove it was deliberate.
Time has proved me correct they said almost those words, l know certainly the local rspca attitude it is very hard to get them to do anything, the animal collection officers do try but the higher up the tree the less help you get. Playing devils advocate how would you prove it they would deny it but even so it leaves a nasty taste in the mouth.

I said if she got one of the other nurses to take over my job l would sort it for her and show her how to pith it. She sent in the spare nurse and l went off to look for some tools, a hammer and sharp longish object/s.

There are only about 3 recommended ways to kill a tortoise but only really one works and if you use the others you should always pith them to make sure as they can shunt blood supply from parts of their body and survive long periods anoxia (without oxygen) cutting off the head is not a way as they can survive for a long time l saw article that said up to an hour. The following is actually the recommended BSAVA method adapted*

First the tortoise was given a very big dose of ketamine. Then *placed in a small anaesthetic chamber (plastic tupperware box with pipe into it that the anaesthetic tubing attaches to. He was in this for about 15 minutes to attempt to help relax him. This may or may not have worked due to my comments on surviving without oxygen,and could well just have been the ketamine kicking in but all means to help are utilised.
When l took him out l hated to do it but still had to pull his head out of his shell but he was by now a lot more lax and did not have much resistance. I got the vet to hold his head.
Then the needle was placed on the top of his skull above the brain stem and driven in l then opted for a slightly larger but very sharp dental drill (unused) which l again hit into the brain stem with my makeshift hammer (an orthopaedic tool) several times to totally destroy it.
The feeling is awful as you crunch through bone and feel and hear it splinter knowing it is driving into the brain along with whatever you are using (needle/drill head).
*Although BSAVA just say once the vet who showed me said to do it several times to make sure.
*I then stood for about 20 mins watching for any signs of life and getting others to check as well. With a tortoise or turtle l stand and look really look hard for any signs of life and gently pull limbs to see if any with draw reflex. In this case it means looking at horrendous injuries. Again this is not part of the standard advice but l want to make sure the poor creature is really dead.

Normally we put an animal down with a clean needle and after the owners goodbyes you then go back and take care of it fast as no reason to stop and stare.

You can see the major injury with the ripped off shell, what does not show up is the damage to the internal section of the body. Underneath the shell is puncture wounds. The skirt where the shell flares out from the body is fractured like a wobbly tooth and lifts up in sections. Smaller holes are in the upper shell as well, some can be seen. 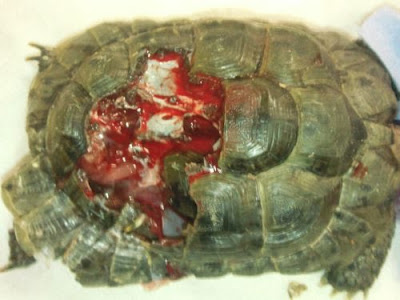 People are really unbelievable sometimes. Such a horrible thing to do to a living creature

Hello Caro
Really sorry to hear about that. Dogs and chelonia don't go too well together really do they. I hope you've dealt with your own mental trauma at least.

I would expect the local RSPCA Insp to have a good go at this one. There really does seem to be a case for a trial. Staff statements, what was seen and heard from the owner. Veterinary evidence of injuries all point towards offences under the AW Act Stion 9(2)(d & e).

I really do hope that the RSPCA pull out the stops on this.

Hi Notosa and Dave l agree the human mind is something pretty sick.

Dave rs have said they are not interested as l guessed they would. We have given them some really easy cases in the past and they haven't touched them.

although i am a lawyer i am not a specialist in this stuff. but what worked for a case in ireland where there was no prosecution was that the family of victims sued in the civil courts. i am sure anyone who was involved suffered enough trauma for it to allow a damages claim. its just getting people to get involved - clearly it is difficult for the vet practice but there may be other people who saw it? its more for the publicity than the money but it might make a point. just a thought.

Maybe the German system would work better, where animal cruelty is in the hands of the police and criminal courts, not some fake charity.

Of course, as far as I am concerned, the sharp instrument and hammer should have immediately been applied to the "owners".

I sort of agree on the prosecution side except we do have a lot of case that come from the police.
By the same token they are so hands tied here on just human crimes l doubt that they would be allowed to take on all animal investigations.

I agree something needs to be done though we have handed several good reports to rs inspectors over the years and they have been ignored. Not sure why unless it is just such a big work load unless it is 100% easy then they ignore it. Mind you many of the cases have been very easy to deal with and they have not so god knows!.

Possibly they need to stop going for the type of inspectors and training they do go for and go for different people and training (certainly up this end of the country)
The local inspector when l started to train as a vn years ago was excellent but he told me then he was being slowly pushed out as he was "old guard". Then he left and various bodies have played about in his old position. I met the latest local one the other month, it was scary. She had been in the job some time but was very young and l had no trust in her dealing with a problem the conversation we had over a dog she had brought in showed a no comprehension but she was using big words that had no bearing on what was going on. I walked off before my famous temper and big mouth flared left her to others.

They also need to put more help and reliance and training on their animal collection officers, the ones l know get as frustrated as everyone else. If the insp. work load is so great then they should revamp their structure and make better use of the resources they have like the ACO's instead of using them as gloryfied slaves.

But they need to keep up their posh offices down the south of england in horsham.

With the sharp instruments yes l felt the same urge.

As I see it, a lot of the problems in the U.K come, because they rely on a "charity". (RSPCA).

In Germany it is a Government run department "Umweltschutzamt", (That is "Street talk", the real name is something 16 pages long...) and it is, in fact, a part of the National constitution to protect animals/Wild life/environment/etc.

It DOES work. For example, a person "training" fighting dogs" can get 15 years in prison. A "pet shop" selling "Komono Dragons", or whatever they are called, and other protected spiecies can bank on a fine in the tens of thousands. PLUS the threat of going down for a few years.

A person mistreating an animal will also end up sewing mail bags (I wish. In prison any way).

I think it all depends on whether the Government takes animal protection seriously, or just pays lip service.

As a Copper here, I just wish they put the same "importance" on protecting "Granny Schmidt". However here is not the place to talk about that.

Vetnurse
I am a Rhodesian by birth was born & brought up in Bulawayo. We came to UK when l was 16. My other half l lived 5 years in Tenerife. While there l ran the kennels for K9 animal rescue. I was head keeper at Tenerife Sur Zoo for a time. l believe in Angels & have seen mine several times. I can't cook and hate the cold & wet on Mud Island. I call a spade a spade or a shovel or a thing to dig a hole. I am a locum veterinary nurse & have 11 years emergency night nursing under my belt, now l only work days. Brian passed in a skydiving accident in 2010 that killed him & his friend, I know he is with me he helps, guides me & gives me strength to go on when l falter, which is quite often. I met Andy and we married last year. He is just as amazing as Brian but totally different except they were/are both great cooks. I am now polyandrous . . . . . . . . . . . . . . . . . . . . Any animal should always be treated by a vet. The comments in this blog are my own observations, Animal details changed situations are real.